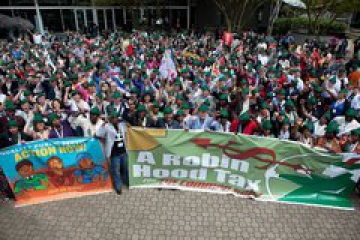 In this blog Teresa Marshall, Communications Coordinator for Public Services International discusses the power of collaboration in bringing about the imminent adoption of a fair and equitable tax justice system across Europe and beyond. She shares her experience of the Robin Hood Campaign to end poverty, inequality and climate change, which she will be talking about in more depth at our upcoming 5 th Knowledge Exchange Forum on collaboration and advocacy .

In the coming months, 11 European states – including Germany, France, Italy and Spain, are poised to adopt a financial transactions tax , or Robin Hood Tax , as it is also known. It’s estimated that this ‘small tax on banks, big change for people’ will raise approximately €34 billion each year that can be used to address poverty and inequality by funding quality public services. The tax is also intended to put brakes on the high-speed speculative trading that causes devastating instability in financial markets.

Despite a co-ordinated lobby effort by financiers, and a delay in discussions while Germany forms a coalition government – achieving the tax appears possible. The German Social Democratic Party is demanding that a financial transactions tax be at the core of any agreement for forming a coalition government. It is also possible for Ireland and other EU countries to decide to join in applying the tax as well.

Just a few years ago, it would have been hard to believe that a financial transactions tax would be the subject of popular discussion, let alone be considered for adoption, in numerous countries around the world. Yet, through the networked efforts of thousands of committed people and organisations around the world – this is exactly what is happening.

In just the past year, I’ve talked with people in Brazil, Guatemala, Canada, the United States, South Africa, Ghana, Kenya, Nigeria, Tunisia, Japan, the Philippines, France and the UK on this issue. People get it – tax justice , including the financial transactions tax as an immediate tool, is an important solution to economic injustice.

The sheer scale of the robbery of the common good these days is beyond criminal. Not only do working people have holes in our pockets, we find that multinational corporations are drilling vast holes through our common wealth – draining the public services and resources that should be sustaining us in times of crisis and building healthy communities for generations to come.

Corruption is the hallmark of the neo-liberal ideology at work here. The scams include elaborate corporate tax avoidance and tax evasion systems, the growing use of tax havens and tax holidays, cuts to business taxes and the forced privatization of public services under misguided austerity measures based on faulty accounting . In the EU, austerity measures are also being used to cut tax collection staff .

But a new face of globalization is emerging that gives great hope. It speaks through the voices of the millions of people of people who are demanding an end to inequality through just taxation and the redistribution of wealth through funding quality public services. Affordable, accessible healthcare, education, housing, transportation, water and energy are not just possible as Millennium Development Goals – they should be the right of every person.

In the wake of the financial crisis, global labour unions marked World Public Services Day in June 2011 with a call for tax justice. Later that year, Public Services International and member nurses from around the world, the International Trade Union Confederation, Oxfam and World Wildlife Fund took a message to G20 leaders calling for a financial transactions tax “for the health of the world.” At the same time, the new Occupy movement made its only ‘official’ demand – for a financial transactions tax to benefit the 99%. The Pope also endorsed the concept.

The Global Alliance for Tax Justice was formed early in 2013. More people signed on to the call for ‘tax justice for social justice’ at the World Social Forum in Tunisia in March.

As corporations such as Google and Apple continue to ‘Double Irish’ declarations of profit to avoid paying taxes, it’s time to demand that they and their ilk pay their fair share, for the benefit of all.

Teresa Marshall is Communications Coordinator for Public Services International (PSI), a global union federation representing 20 million members around the world. PSI engages in the global and national campaigns for an FTT and tax justice in alliance with other labour and civil society organizations.